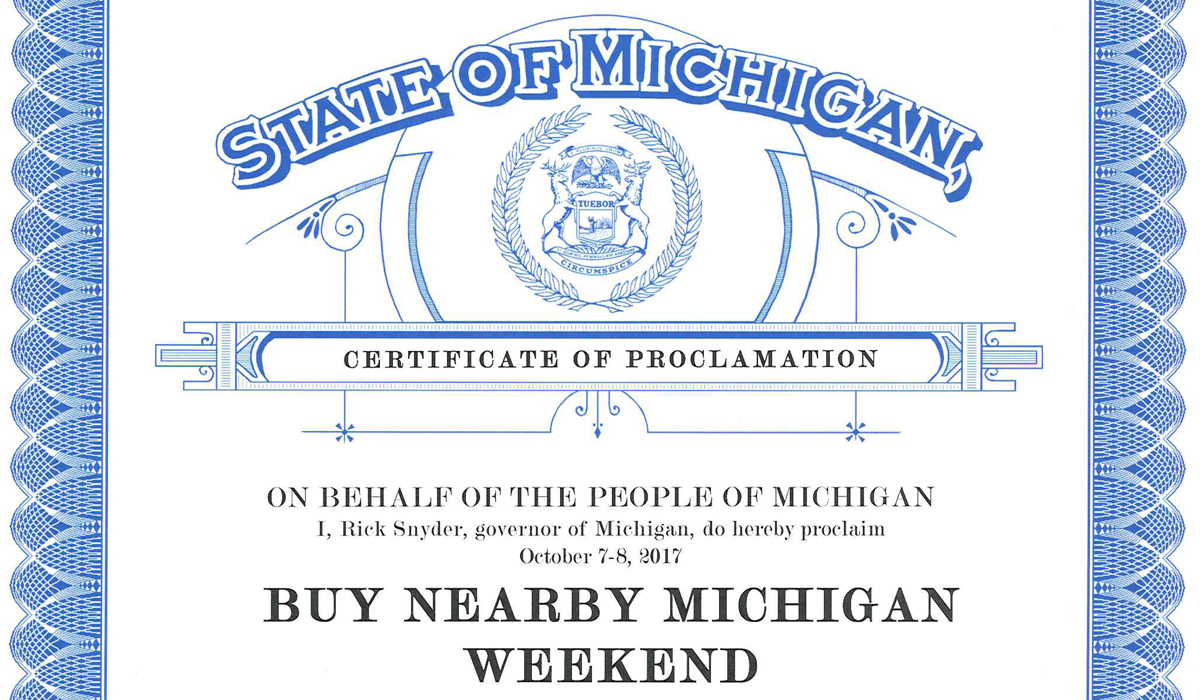 Governor Rick Snyder has proclaimed October 7 and 8 as Buy Nearby Weekend, a special shopping weekend throughout Michigan. Sponsored by the Michigan Retailers Association, the Buy Nearby campaign encourages shoppers to keep their dollars in Michigan.

While it’s a year-long campaign, MRA annually sets aside the first weekend of October to celebrate the concept of buying from Michigan retailers.

The Governor’s proclamation recognizes the importance of patronizing local stores: “If Michigan consumers chose to support retail businesses in Michigan by always buying nearby rather than from ‘remote sellers,’ Michigan would gain more than 74,000 additional jobs and $9 billion in additional economic activity.”

In addition to being a key economic driver, retail also improves the vitality of Michigan’s communities, the proclamation says. Both the Michigan Senate and Michigan House of Representative are also expected to recognize the importance of Buy Nearby Weekend.

Major sponsors of the Buy Nearby campaign are DTE Energy and Retailers Insurance Company.

For full text of the proclamation, scroll past the photo below. 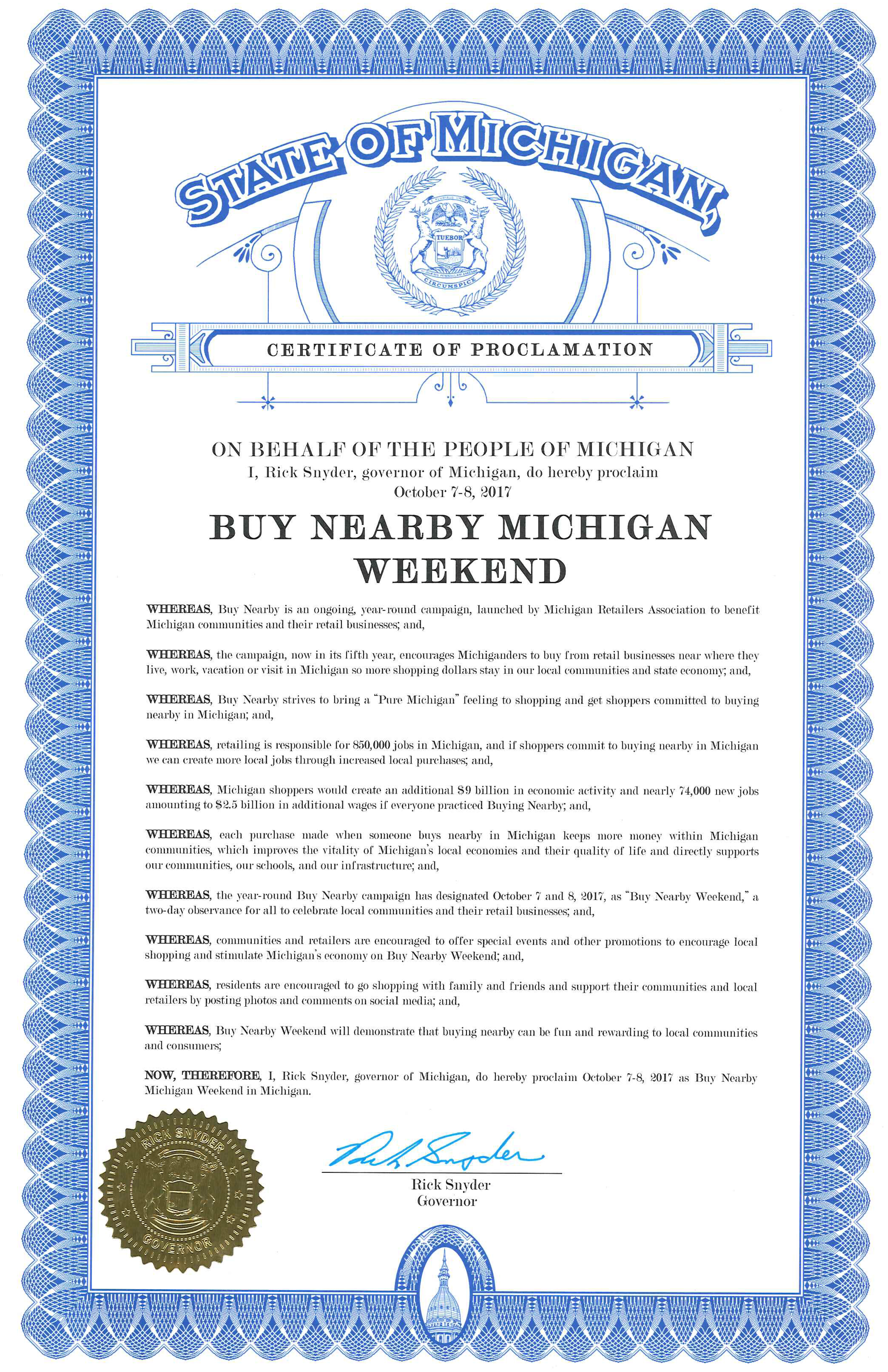 ON BEHALF OF THE PEOPLE OF MICHIGAN
I, Rick Snyder, governor of Michigan, do hereby proclaim
October 7-8, 2017
BUY NEARBY MICHIGAN WEEKEND

WHEREAS, Buy Nearby is an ongoing, year-round campaign, launched by Michigan Retailers Association to benefit Michigan communities and their retail businesses; and,

WHEREAS, the campaign, now in its fifth year, encourages Michiganders to buy from retail businesses near where they live, work, vacation or visit in Michigan so more shopping dollars stay in our local communities and state economy; and,

WHEREAS, Buy Nearby strives to bring a “Pure Michigan” feeling to shopping and get shoppers committed to buying nearby in Michigan; and,

WHEREAS, retailing is responsible for 850,000 jobs in Michigan, and if shoppers commit to buying nearby in Michigan we can create more local jobs through increased local purchases; and,

WHEREAS, Michigan shoppers would create an additional $9 billion in economic activity and nearly 74,000 new jobs amounting to $2.5 billion in additional wages if everyone practices Buying Nearby; and,

WHEREAS, each purchase made when someone buys nearby in Michigan keeps more money within Michigan communities, which improves the vitality of Michigan’s local economies and their quality of life and directly supports our community, our schools, and our infrastructure; and,

WHEREAS, the year-round Buy Nearby campaign has designated October 7 and 8, 2017 as “Buy Nearby Weekend,” a two-day observance for all to celebrate local communities and their retail businesses; and,

WHEREAS, communities and retailers are encouraged to offer special events and other promotions to encourage local shopping and stimulate Michigan’s economy on Buy Nearby Weekend; and,

WHEREAS, residents are encouraged to go shopping with family and friends and support their communities and local retailers by posting photos and comments on social media; and,

WHEREAS, Buy Nearby Weekend will demonstrate that buying nearby can be fun and rewarding to local communities and consumers;

NOW, THEREFORE, I, Rick Snyder, governor of Michigan, do hereby proclaim October 7-8, 2017 as Buy Nearby Michigan Weekend in Michigan.

Podcast: Meauwataka General Store: A little store, atop a hill, in a forest

Pam Sandy, co-owner of the Meauwataka General Store, explains how a trip up north to…